(Single supplement of £50 per night)

Challenging - the event is 177km and includes over 5,000m of climbing

La Marmotte is regarded as one of Europe's toughest events, and is a key event on many cyclists' bucket list. The event totals 177km of tough riding, featuring 5000m+ of climbing over some of the toughest climbs in the Alps.

2021 was the 40th anniversary of the Marmotte, and involved a change of route to include the Col de la Croix de Fer instead of the Col du Glandon. The remainder of the course remains the same, taking in the Telegraph, Galibier and finishing at the summit of Alpe D'Huez.

Plus, for those of you who are after even more of a challenge (like the Marmotte itself isn't enough?!) there is the 'Ultra fondo', which takes in an additional ascent and descent of the Col du Sarenne and a second ascent of Alpe D'huez - an extraordinary challenge at 225km with 6,300m of climbing!

7,500 cyclists tackle the event every year and the atmosphere is immense - entries sell out FAST, so be sure to get in early to guarantee your spot. 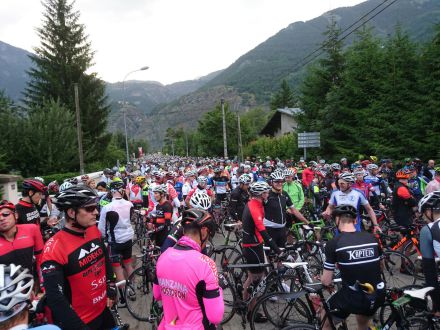 Contact us for further information, or book via the link below....then get training!